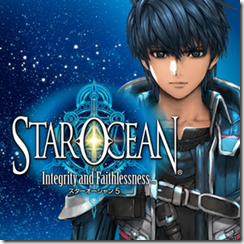 "Square Enix is just starting to outline their plans for Tokyo Game Show where Star Ocean: Integrity and Faithlessness will be playable for the first time.

Developed by tri-Ace, Star Ocean: Integrity and Faithlessness takes place between the events of Star Ocean: The Second Story and the PS2 game Star Ocean: Till the End of Time. The battle system will be similar to Infinite Undiscovery, an Xbox 360 exclusive game tri-Ace developed.

Dragon Quest Builders will also make a splash at Tokyo Game Show with a special presentation. More details about this will be announced later."

So this game takes between Star Ocean 2 and Star Ocean 3? can we dare to hope that we get some kind of cameo between SO2 and SO3? I hope they make some of cameo or join the group that would be amazing but I doubt that would happen T_T but this game I'm excited for it
Collapse