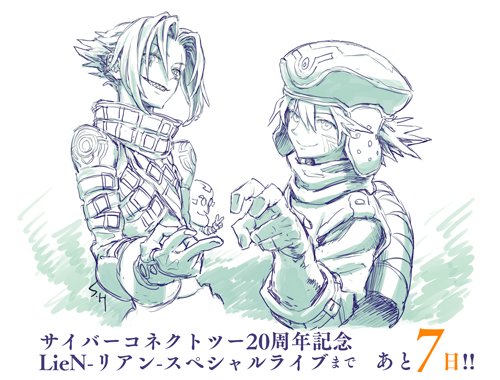 I like to think that after .Hack//N.U. that this happens somehow...
It's like they are saying choose me or something...omg never mind maybe I'm thinking too much into this...
Haseo has sharp teeth...as they reach out too...is that Yata in the back?? He kind of looks like a potato.

Media : FRESH by AbemaTV
Android user may try to install it
https://play.google.com/store/apps/details?id=jp.co.cyberagent.valencia
From facebook.

Alright this is updated and I'm slowly letting .Hack//N.U. go...it's been really hard since I loved that game no matter how much people hated it and disliked it I'm still sad to see it go... T_T

However I found something to replace it.

link- https://ro.my.com/en
A Chinese game that is doing it's Beta right now the beta ending is tomorrow I think... and yes I like that game it reminds me of GW1 and Aion and that has been taken up my time lately >_> and no I didn't let .Hack//N.U. go I'm still playing to the end like I said I was <3

One funny thing I did noticed win watching them in .Hack//N.U. that is...Kite and Haseo have a colliding going on...I give one gift to Haseo exit then come back and watch my character sit down and somehow Kite gets to talk to my character first so...I have this feeling that maybe they are rivals for the love from the character we control? lol omg and yes they can show win they are jealous if you pay attention.

(Well for what I've seen and studied if Haseo isn't talking to Kite or Phantom Kite sometimes Haseo and Azure Kite just chase one another around by talking it's funny...and bittersweet)
However that comes to a stop win they don't say anything else and try to push there love onto the player character 'you' and that just makes waves.

And I finally failed at that rubbing game I did it to test to see what happens and boy did Kite look disappointed the timer after that was 9 hrs I wish they cut the timer down but yes it one game that is kind of romantic in .hack//N.U. but nothing really happens after you do that mini game even after you reach level 100 in romance it just there.

But remember this is only a music event by LieN and CC2 has not said anything new about any new or remake .Hack games yet so this might be our only chance...

Please be a PS4 game or another phone game or something.
Collapse