It's Fayt and Sophia.

So Sofia-Sophia she a fire elemental she like Myuria but better that's what people are saying.

I also heard people in Japan don't like Sophia but they did make her cute...I myself don't like her I always thought she was too...clingy and ugh I did not go for Sophia ending in SO3.

As for Fayt I heard his elements switches between fire and light or was lighting? and he has buffs that supports so no more Millie so depending on the boss Fayt element switches or so that what people said.


another thing that was said 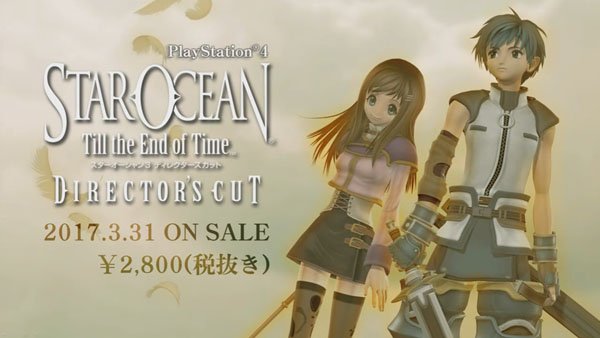 No word on a English version yet.

So tonight live video felt more SO3 then anything else not that's bad.

Huh someone tried to translate this...Fayt skills are
"side kick, mirror blade and shotgun bolt" mirror blade...? what? Fayt never had mirror blade I wanted that dimension door anyways we will see tomorrow how his skills are really are.
Link- http://dengekionline.com/elem/000/001/489/1489186/
RIP blade of fury and dimension door omg why give Fayt that they should of given him explosion.
And yes his air raid looks...odd I'm calling sideways air raid with angel feather effects it looks weird but cool.

So in this universe I'm saying Fayt forgot his symbology and learn Mirror blade.

Now that Mirror has gone around don't you think so many characters has that or double slash? er...maybe it's me?

People was saying Albel is the only one that stands out differently somehow in skill wise?
So today I switch to Rena and did some events switch back to Albel and man Albel is OP very OP win he's at 6 stars it's his whole Air Slash of Fury I tell you that's all you need to take them down.

But as I said before my Iphone has all the good characters and my Ipad don't I almost think that account is cursed.

back on topic so yes Star Ocean 3 madness is almost over with tomorrow will be the day of the highlight Fayt and Sophia will drop into the game I hope I get Fayt.

I'd advise you to watch Program 10 it's a must.
link- http://asukai.livejournal.com/84825.html
Collapse