"[9 / 7 (Thursday) maintenance: after tomorrow, 14:00-we 16:00 to add new events due to maintenance work. With the maintenance starting events to see the destination of causality"or"TVCM broadcasting commemorative pickupgacha"can be finished. Please note that."

So this is your last chance for gems the TVCM is going to be over soon.

Wait...did Ashton and Mavelle not sell?? I did see a lot 'youtube' people roll of Ashton not Mavelle I think that was a hint there

But the problem was that Ashton wasn't that powerful as in OP in the matter he is alright but not that powerful and Mavelle falls under that also not being 'OP' like some characters we have.

One rumor going around is you know how they 'promised' you can upgrade some skills right and get new ones? Well someone was saying they are only going to be for special characters...O_O

I just hope that rumor is wrong please be wrong I just don't want special characters to get it...

There are some other characters that need that upgrade badly win that upgrade hits the lower tier might be worth playing if you go by tiers I myself don't worry about 'tiers' but I know a lot of people trust that.

Do you think Ashton and Mavelle sold good?

The youtube video is rather 'low' compared to the swimsuit girls so...

This is odd the swimsuit girls did sell but it drop low the TVCM was watch so many times however from what I know they wasn't...that loved people rolled for them but didn't spend that much money on them

That why they turn to making Ashton they wasn't getting that money and the fan base had enough of girls so what happened?

As they said in the interview they are going by Popularity Factors this means for the characters they are making and what they are going to sell if Ashton and Mavelle didn't sell that means...

"Confirmed to be about [character balance adjustment] current character "Mavelle" regarding performance and difficult situation. Because of this the next time 9 / 7 (Thursday) maintenance when some talent adjustment is scheduled for. For more information, please check your app in the news"

>_> Mavelle buff her Ice skills are getting a buff

Now they are making her OP

People right now are expecting a weapon Gacha nothing is being said.

I'm going to wait for more info and if we get a new program or not people was saying it was supposed to be tonight er...today soon? however nothing was said so... 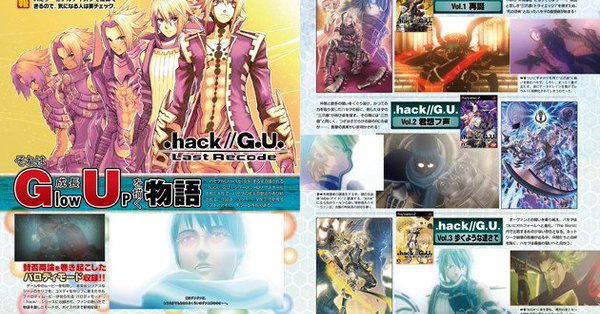 It's official we have...5 different Haseo from G.U. alone

Now the 5 Haseo don't count from the ones from Link, Guilty Dragon, N.U. you get the idea so Haseo has lot of copies he can almost outmatch Azure Kite and Kite copies...lol

I want the game now but we got a bit and I hope we get new characters added to the game like BlackRose, Kite even Tokio you get the idea and maybe dlc?

I'm loss with all 5 Haseo copies personalities that will come in omg and that don't count Phantom Haseo from Guilty Dragon...hey that gives me a idea I'll save it for later

I'm always happy to hear some news from G.U. even something like this I still want this game badly

But yes this is little info on .Hack//G.U. that was posted by famitsu

5 Haseo copies with the Kite copies we can...er...*cough* moving on