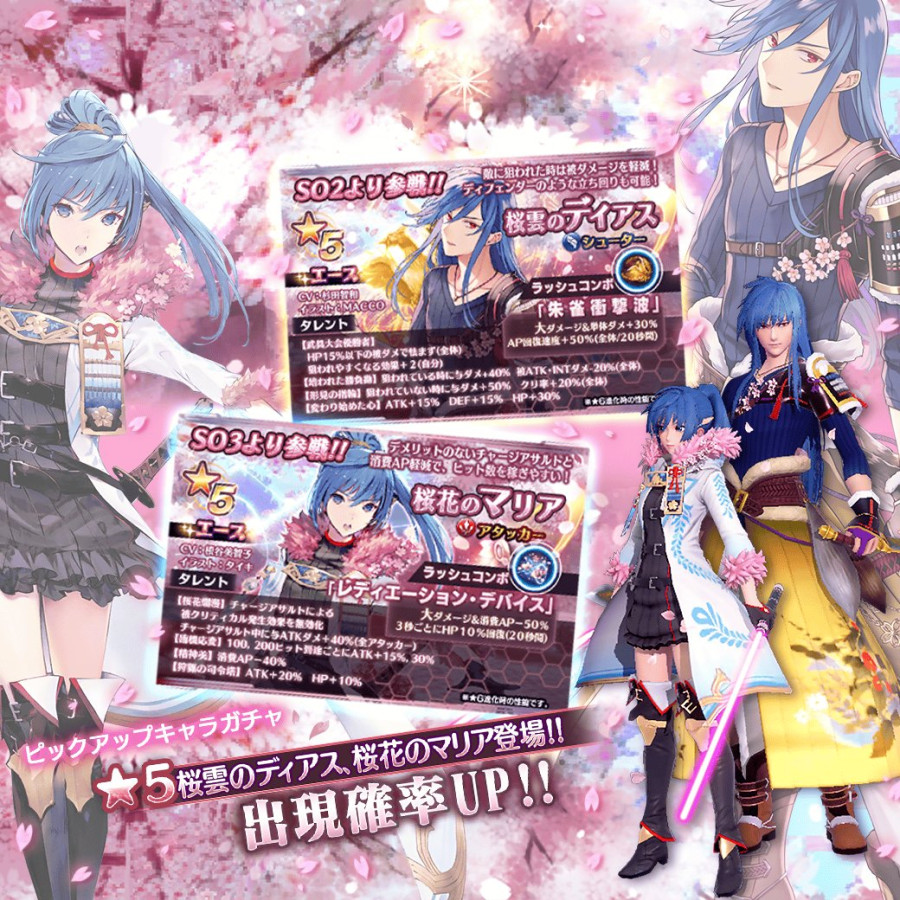 "[Pickup gotcha held!] 3/15 (Thu) After the end of maintenance, the new event "the bond that sprouted with the star of cherry Blossoms" starts! In conjunction with [Diaz of Cherry Blossom] [Maria of cherry Blossoms] pick-up gotcha appeared probability is up! The pickup period is 3/29 (Thu) Maintenance!"

I'm tempted to get them I do want Cherry blossom Maria but I heard Blue Cloud Dias is very good.

If you love Dias and want to support him get this version of him people like this version of Dias now if you have a awaken Dias well you might as well stick to him since you got him awaken I myself was working on him on both accounts my defender Dias but I stop since I got A2.

So Cherry Maria and Cherry Dias brought them in beside the Neir characters I want to give up the 9S chase on my main account...T_T he keeps avoiding me

Oddly enough win play as A2 on my alt or my main account both Fayt on both accounts do not protest in fact I think they like it too much...put any other girl that I'm not playing as in the party they ignore them or protest so....yeah.

Well Fayt is into the whole VR world thing and A2 is an Android it don't surprised me at all I just got a feeling Fayt is attracted to anything internet related or VR related wise and I noticed Rena acts a bit jelly win A2 is in party win I play as her...hmmmm well females in this game I noticed if you play on auto battle you can see who they like and dislike anyway Rena is another possessive type of girl but so is Fayt he acts very possessive on auto battle and other guys it depends and who he can get alone with so far I can tell Fayt get along with Faize who been in many events with him *hint* *hint* and Fed Edge and Winter sky Fidel other guys who Fayt is with Fayt will collide with them that why I only use Rain or Dias on boss battle.

That why I was so surprised win Fayt did not protest win A2 was around or win I'm playing as her...I think Fayt might of like it too much that the feeling I got

A2 on my main account is maxed LB out and I have her GS now I use her in boss fights but that time I've taken her out and replaced her with Rain I switch them around A2, Rain and Dias sometimes my alt don't have a high A2 yet lack of LB stones.

This Cherry blossom event hinted a lot of Maria and Dias hints move over Albel you can't fight or flirt with Dias he's with Maria but that little ending with Chisato trying to find out what Dias is up to ruined the whole Maria and Dias moment...

And I was more surprised Faize was not with Fayt the last events they been together you know...and I have to say the whole Fayt and Roddick moment them teasing Dias like that they are hooked on watching romance I swear it might be a hint how romantic Fayt and Roddick really are but the guys did almost ruined that and mostly Albel upset emotions and yes Albel had the last words in that mini event.

And don't forget about June wedding event with Reimi and Fayt hello we get to see how much Fayt is romantic then must save gems must save gems...

However that event Dais and Albel had was all fighting and fighting at one point I thought...hey Albel ditched Fayt for Dias...until this cherry blossom event showed up with Dias and Maria *hints* all the way that is until Chisato showed up to ruined that dream even Roddick and Fayt was getting all 'drooling' over Dias and Maria getting together but Albel and Cyuss said otherwise thank you guys...>_<

And win Chisato showed up with Ilia I was like there goes that event.

But the Cherry blossom event was fun try it out and see for yourself.