【3周年大還元RTキャンペーン第4弾】 12月8日の3周年当日に向けて緊急開催！RTに応じて3周年記念ギア2種などを全員にプレゼント！さらに最大6,666RT達成で紋章石が抽選で当たる！ 〆切は12/8 AM11:59！ そのほか大還元の3周年イベントについては特設サイトへ⇒https://sqex.to/RpwiD #アナムネシス
[3rd anniversary large reduction RT campaign 4th] Emergency held for the 3rd anniversary day of December 8th! Presents to everyone, such as two 3rd anniversary gear in accordance with RT! In addition, the heraldry stone wins by lottery with a maximum of 6,666RT achievement! 12/8 AM11:59! In addition, the third anniversary event of the big return is visited to a special site. ⇒ https://sqex.to/RpwiD
https://twitter.com/SOA_SQEX/status/1200248012619931649 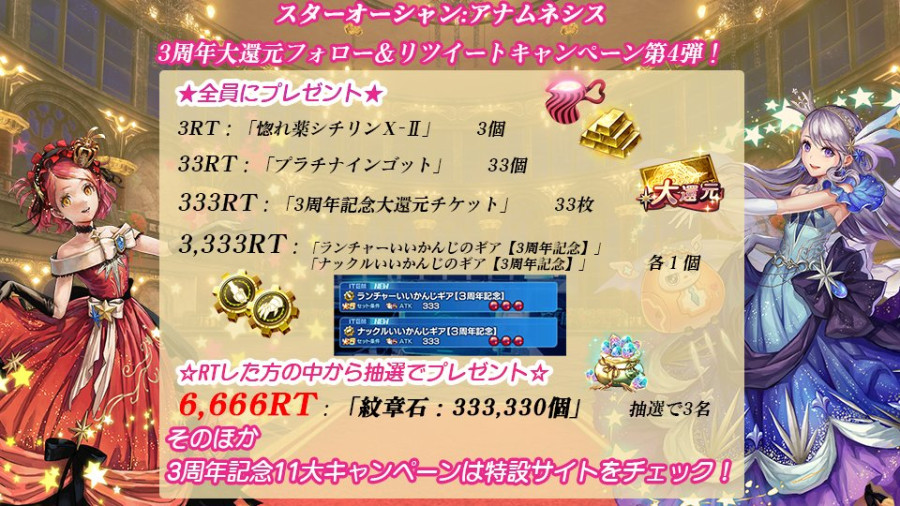 
[3rd anniversary large reduction RT campaign 3rd] RT Campaign 3rd presents increase according to the number of Rts of this tweet! If you achieve up to 5,555RT, you will receive a new character by lottery! The cut-off is 11/25 AM11:59! #アナムネシス

【P5R Collaboration Information】 Captain! It is a [Chara Deco] function that was implemented the other day, but collaboration limited deco item is scheduled to appear Today I will introduce a little how i put on such a deco item! And today I'm going to have another one more notice!
I'll post this shortly!
Special Site ⇒ https://sqex.to/JfN0L  #アナムネシス #P5R #残り3

in other news
【P5R Collaboration Information】 Captain!
The decision to hold the second round of the campaign is held in a well-received way.
Follow this account & rt of this tweet! ※ The target present is added according to the RT number. The character will be presented on the day of implementation.
The deadline is until 11:59 tomorrow!
※ The winner will be drawn from rt! #アナムネシス #P5R
https://twitter.com/SOA_SQEX/status/1181163908771352576

campaign is up and going if you have twitter help them out by doing the campaign.

【ウェディングキャンペーン】 6/20(木)メンテ後よりウェディングキャンペーンを実施いたします！ 期間中、復刻ガチャ、復刻イベントが開催されます！また、新スタンプが手に入る特別なログインボーナス等も開催されますので是非ご利用ください。 #アナムネシス
[Wedding Campaign] 6/20 (Thu) We will carry out the wedding campaign after maintenance! During the period, reprint Gacha, reprint event will be held! You can also take advantage of the special login bonus that you will get with the new stamp. #アナムネシス
Link-https://twitter.com/SOA_SQEX/status/1141603382269898752

Out of nowhere the bride girls have comeback. 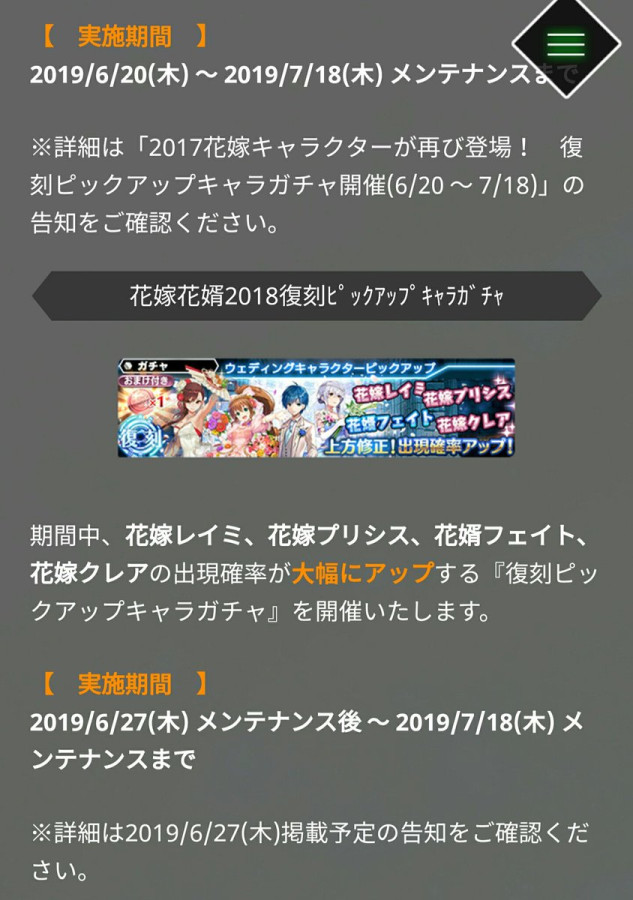 "state that the character of the performance has been adjusted"

may the RNG be with if you pull for them I'm not since I got 花婿フェイト on both accounts.

So the new VP collab is a 2 part event they say.

The good thing old characters Lenneth is returning to get her they also are giving her awakening so her and her sister are not going to be useless.

The bad thing the rest of the SOA characters have to wait until VP is over with to see who is next in the awakening so far we only got Fidel no one else.

So part 1 of this event starts tomorrow keep in mind we are still voting.

They did post Clair and Nel new year outfit stamps >_> I think if we had no got this VP that everyone on youtube and twitter wanted we might of gotten New year characters that my thoughts but the last crossover we had people was pissed they wanted VP and no we got it...we might of missed out on new years.

No news on who is winning now for the voting.

My mind is still on the voting I can careless about this but if you're into the whole VP go ahead and draw I got Lenneth on my main account and I'm not using her.

Now here is the big deal

good luck to the people who are going to enter I am I'm always playing this game everyday so may the RNG be with you.

The downside to this 1,000,000 is that they made a digital error it not that much they tried to talk down about this and someone made a mistake so it might not be that much win you do win it will automatically go to you account.

Overall this mistake is to draw people into this game so is the girl gacha it all bait looks like they are aiming for the guys this time.

No new on the skill update so far we only have Fidel who is the only one who is awakening I think we got to wait until VP is over with to see who they are going to push out so that might mean they need more time.

So next update is VP incoming with new Gacha related to VP and Lenneth awakening nothing related to SOA just all VP.

Next Jan 2018 win we are still in VP...I'm going to be hoping they awakening Rena or Fayt by then...and I'm going to be putting all my focus onto the voting.

Voting is still going on support who you want.

I'm voting for Fayt and Reimi.

But yes this is the VP incoming tomorrow and to be sure that you vote for who you want.


Now this is based of my ideas and what I'm seeing on twitter.

People on discord says that giveaway is not going to be paid out until mid January?

Just enter that all I'm going to say it best just to enter and hope you can win.

艦長ー！TVCM放送が始まったみたいですよ！ナレーションはボクの中の人である中尾隆聖さんです！キービジュアルポスターにサインもいただきました！中尾さん！ありがとうございました！＼(｀◎∀◎´)／
"Captain?! TVCM broadcasting has been started is like! Narration is Mr. Ryūsei Nakao person inside of me! Whats the key Visual poster sign? Mr. Nakao! Thank you very much! / ('◎∀◎ Be)"
Link-https://twitter.com/SOA_SQEX/status/870144038275432448

So twitter TVCM Campaign has started if you login in today you will get gems I did on both accounts.

If you have twitter help take part in this I did yes SOA Campaign time.

However if you make a new account and you reached this twitter end you will have lots of crystals from being 'new' and the story just to keep that in mind.

But sadly to say no word on a English version of this game yet I heard you can play this game win using a APK however I can't get this game running on Bluestacks 2 or KOPLAYER so I'm using my Ipad and Iphone.

And yes Fayt and Sophia drop tonight soon very soon this is going to be madness I tell you.

People was saying they want Fayt and Sophia but they want to save gems for the collab win they do events it looks like the cards are a one time thing so it's rare if you draw them like Valkyrie Profile Lenneth she's rare her card never drop back into the game yet.

So yes I hope to use some of my luck tonight time to do some drawing.

And don't forget Luther is drop into the game for a boss event so get ready and have a healer and fire element.

Update
【3/23(木)メンテナンスのお知らせ③】 現在実施中のメンテナンスにて、一部問題が見つかったため、延長させていただきます。終了時刻は現時点では未定となります。皆さまにはご迷惑をお掛けして申し訳ありません。
Link-https://twitter.com/SOA_SQEX/status/844822094806343680
"[3/23 (Thursday) maintenance ③] will be to extend the current part in the ongoing maintenance issues was found, so. The end time and undecided at the moment. Sorry for the inconvenience to our guests"

So time for the new maintenance is...'unknown'...noooo.

Update 2
【3/23(木)メンテナンスのお知らせ④】 現在実施中のメンテナンスにつきまして、終了予定時刻を19:30頃とさせていただきます。ご迷惑をお掛けして申し訳ありません。メンテナンス終了までもうしばらくお待ちください。
[3/23 (Thursday) maintenance ④: now with regard to ongoing maintenance, scheduled ending time will be 19:30. Sorry for the inconvenience caused. Maintenance end now please wait for a while
link- https://twitter.com/SOA_SQEX/status/844847766673154048

I'm still waiting...O_o... for Fayt I can stay awake but some people are upset Fayt has no Dimension Door but they already rated Fayt as a 'Ace' so get him if you can.
Collapse