Haseo finally got what he wanted after all this time he is Waifu Tsundere Haseo 2:39 Atoli accepts defeat and I see Pai and Yata smirk here and Shino is drooling so that means...Shino might be...a fan girl??.

People are saying this is the 'cannon' and True ending now note to self Haseo is Waifu to Ovan so Haseo is the 'Uke' here and yes Ovan outfit do look pretty a hint to that and Haseo in a dress we need that.

But the choice is up to you and you can make Haseo marry anyone you want however the whole point of this new story and the whole .Hack//G.U. Haseo has feelings for Ovan keep that in mind.


Normal ending if you don't choose to marry Ovan.

So both endings says one thing you're end is Ovan no matter how you feel that's a hint to Haseo desire.

Vol.4 is all about Haseo and Ovan keep that in mind.

Nah I'm not playing vol.4 not yet the whole Ovan is with Haseo is not enough to draw me into that.

So no new characters has been added yet from what people are saying they are expecting DLC but I doubt it.

So no Kite or BlackRose here? That's...disappointing.

And new info that green hair person who I thought was Cubia wasn't Cubia that was Tri-Edge that AIDA that is linked to Ovan who has deep feelings for Ovan hello Rival to Haseo.

So now you saw both endings are you going to marry Ovan or not?.

I was going to wait until after .Hack//N.U. shuts down but I want to post this before it dose.

Someone did the whole game it might help if someone is looking for more info.

The game shuts down very soon so say your goodbyes now I did login all my accounts and some players was out right now in town.

I was sitting here trying not to cry again...looking at my cards *cough* er...our NPC friends.

However the ending they did post in the video is not a cliffhanger ending?

"Come and find me?" something to do with the crying women or people was calling her the crying princess.

Usually the game dailies start around 7:00 AM our time er...7:00 am PST so I'm guessing that win the game will end from now I can be wrong another time they use is at 8:00 PM PST that win they do updates so I'm not too sure what time they will use.

update- time above after looking at the time.

But it loos like .Hack//N.U. has two possible endings that the player can choose will that lead to the end of .Hack?? time will tell.

No word on anything new in .hack related but more rumors about FF7-R in 2017 and you know that CC2 is helping square enix with this game that's why maybe they had to shut down .Hack//N.U. not enough time.

But more games that are not hack related they are making with more Naruto games.

I also heard in a rumor among facebook and twitter that .Hack//N.U. was not liked...I don't know if that true or not in Japan.

But on twitter people do post about .Hack//N.U. and WAS sad about it ending that I saw myself so I'm getting conflicted info right there.

So that's about the only info about .Hack//N.U. right now I got to say until the game end I'll post my thoughts about it T_T 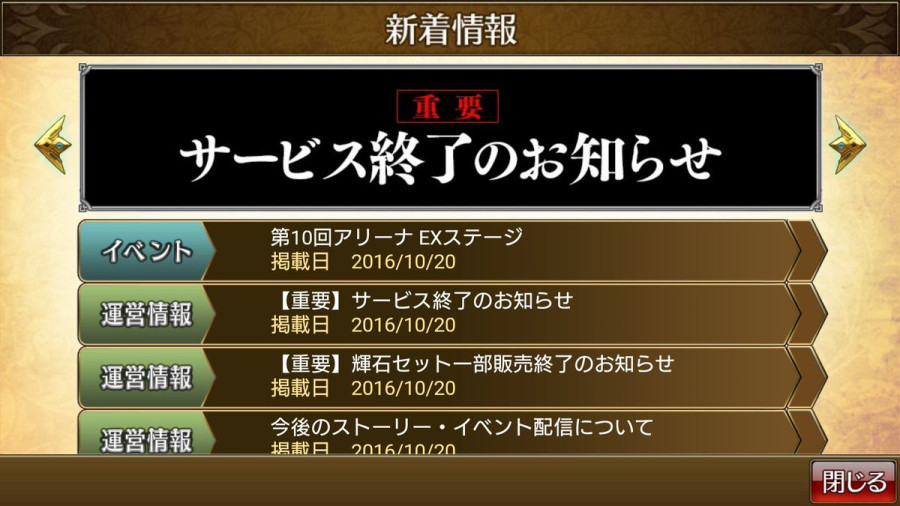 B-But you was our hopes and dreams! Noooooo!!

Omg I need to start making videos now T_T IF you want to play .Hack//N.U. I advise you to DO it now on Bluestacks I know Bluestacks is annoying but This IS the only chance you get to see what this game is!

And then look for

This will help you DL .Hack//N.U. use the apk to install qoo-app

My guess is that CC2 decided to pull the plug on this since they are making more other games like Naruto or they are pulling for FF7-R they are also working on sorry for being bitter but I-I gotten use to seeing .Hack//N.U. characters this is so sad T_T I would wake up and look at them and...omg this-this is like losing my friend I'm sorry...

But...I was wondering why we haven't gotten the second round of Azure Kite the world is going to end again.

Just like .Hack//Guilty Dragon...that game I do miss I'm going to make videos to help me remember how this game was...I never gotten attached to a smart phone game before and this is truly sad not even a year and it's gone... T_T

Do you remember? Winter 2016 hints rumors? I thought it was going to be .Hack//N.U. EN since the game had lots of English texts ect but...I never thought that win this game would end...was game a Test!?

To see if they was truly .Hack fans alive!? So that's why they are pushing harder stories out

I just hate this I hate how they play with my heart...I love this series so much and for them to do this...

Is that why win they had that crossover with SAO the game was dying!? Or...was it they wanted there fans to love SAO more?...

I played this game because I love this series I supported them because I never wanted to end...But they never showed interested in remaking any of the .Hack games none whatsoever just teasers and once they got you hooked they destroy it.

I apologize for being negative but this is how my feelings are...

But I'll be here win the game goes down I'll watch it to the end another game gone into our dreams.

I don't know if I can finish the story they stop selling crystal so...this is going to be hard.

But wait...the world announcement the same day Nintendo Switch? People are very curious about it also maybe it's something maybe it's nothing.

Maybe people are clinging onto any kind of hope they can find out of this...tragedy.

Do you remember win .Hack//Guilty Dragon was dying? The drops was endless so was the cards is .Hack//N.U. going to end the same way? Endless Crystals?

But...what about the promise that .Hack//N.U. was going to be in vol? Was that not real?

Either way this is a sad day.

You got until 20th December 2016 to play this game then it vanishes forever into the abyss.


FF7 Knights of the Round

This video his Major spoilers to those who have not played the game! watch at your own risk!

"Finally, the last animated scene plays. A mysteriously shadowed figure waltzes into the ruins from the very beginning of the game, taking their slow time to observe the scenery. The camera pans to a blue-clothed person with long, white hair tied into a ponytail. His face is revealed: it’s Mikleo, after a timeskip of an unspecified amount of years. He manages to slip into the hole and quickly braces himself for the fall, only to come to realise someone caught up. The camera pans to a familiar glove grasping hold of Mikleo’s hand. Mikleo glances up, and the light illuminates the area around said saviour, leaving his form a mere silhouette. It’s Sorey. Mikleo smiles"

So yeah Slay and Mikleo ending or we can say Mikleo and Slay ending to O_o and the fan girls go wild o_O yes Slay has come back for him I'm not too sure much time has passed maybe he didn't age at all? no one knows *cough* time travel might be possible it just a theory

Link- http://pakaplus.tumblr.com/post/108899775008/tales-of-zestiria-spoilers-for-whoever-wants
You can read what happens here

update- added a new video to replace the removed one

I've found them! well yes the real ones not the old remix ones on Youtube so yeah

So yeah my new Icon is from my MC/Naoto Doujinshi yes I got more Doujinshi of them on the way I love that couple I'm such a odd ball fan girl lol so yeah I've upgraded if you had not noticed so yeah enjoy now!
Collapse