Long ago we was all looking for him the flame champion

the flame champion in pokemon masters

The Flame Champion in Pokemon masters 🔥

working on my team right now.

Not my full box I did get Blue maybe he the reason why Red come to me? 🤔

Stevne is not holding back 😍 omg you should see who all shows up win Steven talks to the MC win I was pulling for Red
both Brendan/Ruby and Lyra was behind the MC I was oh god they are so pissed yes I got both Brendan *Win you confuse May with Lyra* they look alike...>_>
wait if both rejected Steven this is why Steven like/loves/stalker to 'us' why would both of them show up creepy behind my MC?...
did they hope my MC would reject him? Not going to happen. Steven was talking about how much like us and our pokemon.

look at Red event to me it feels like Red is 100% Tsundere Flint had no chance to be with him.
it like night and day Steven and Red their personality looks like Red has no interest with the MC I'm thinking Red more into Blue.
Red has the power but to me Steven feels like a warmer personality to talk to the way Steven acts he only warm to the MC 'us' by the looks of it.

I got 1 Red and you can see how many Steven I got I might just end up with one Red after I did some story come back Brendan and Lyra was gone.

talk to Steven he said this along with some other stuff 👀

I 💭 who Red reminded me of and hit me Flame Champion from Suikoden III
The guy who never talks the Silent protagonist. (Yes I know red talks in the event)

Red has red outfit and has fire he is the reincarnation of the flame champion from Suikoden 3
this would make a good story! I never did a Suikoden story in a long long long time.

it was fun to make this post I got Red on my 1st roll now you ask what is Suikoden 3? Go play it I wish they remake Suikdoen 3 on the PS5 that would be amazing.

May the RNG 🙏 you tonight for Red.


SOA JP I know about Rena I'm not going for her so that's a no for me she looks cute but no. I'm still playing SOA with my 3 accounts on JP side and now Pokemon masters I got a lot of stuff to do.

if you want to try Pokemon masters now is the time to get in the game and get both Red and Steven for a good powerful team.

Reddit is saying Steven likes gems and they are upset about that might be not true I think it might be your personality or what user name you used.

I did my part on JP

Got the healer set him up as assist skill for SRF Fate.

Zero RNG got him in one roll talk about luck.

So I did roll this time on both accounts the setup is pretty much the same Ioshua is alright tried him out he has that buff win he heals.

Update did my part and rolled on my main account to support this game.
this is my setup.

Ioshua has that buff win he heals if you have winter clair you are good to go.

May the RNG be with you.

I did some RNG draws for the GS alone O_o yes I did roll and I did spend my hard working Yen in this game.

A2 has a good weapon for my alt account

my alt did spend gems T_T

This time I had to spend some gems it wasn't lucky as my alt was...T_T

So good luck if your rolling for the newly GS I did get the Rifle I'm not using it unless they give me someone I'm going to use it maybe Wedding Reimi? *cough*

I am still playing this game on my Tablet and Phone so I will support this game.

But it's all up to your RNG for this game if your rolling for this new GS it's very good.

I'll never have Alt Albel So I'm going to focus on A2 on both accounts for my GS user. 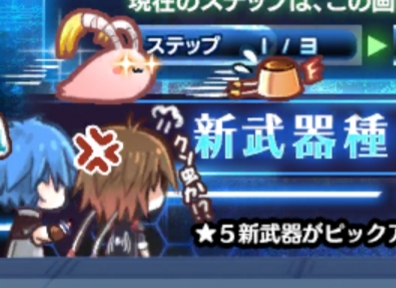 Fayt and Alt Albel lives so this is the first hint between the two in such a long time it did make twitter alright there was no talk between Fayt or Albel since SOA dose this mean Albel will appear in Fayt Wedding Event? Beside the salty Sophia? They might since it obviously hinted in SO3 Fayt had a 'thing' for Albel somewhat, this just felt like a light teaser to the fan base that they know that people do ship AlbelXFayt or FaytXAlbel this second time we see Fayt with Albel in SOA the First time was the school event where Fayt wanted to see Albel not Sophia but Albel was taking a nap in that event and didn't get to see Fayt at all Fayt ended up fighting some random guys and getting upset that Albel didn't show or talk to him.

Fun fact people on twitter like calling Albel pudding Albel for what reason we don't know maybe it a hint to his hair?

Take a look at the triangle that is Fayt, Albel and Cliff that is another war.

So we don't know who the 'Guest' is and it might be one of the characters and Clair is not on the list people think it might be her.

Maybe the June Wedding event? First was Reimi and Fayt
Second place was Clair and Albel so maybe they might be showing wedding pictures?
Or not we don't know and they wanted to do another collaboration O_O but they wanted people to give them ideas or something...>_> The whole collaboration they talked about it on the radio or something that was the rumors among discord chat.

My feelings is they kind of screwed up valentines day event Cat Rena was all the hype until she had no Health Regeneration and they added Welch and Verda, Welch who was adult like and sexy but same personality and Verda the little girl I think they might of dropped the ball here...Verda was something people was not expecting.

So they tried to redeem themselves with Crimson Grace Phia Melle hello breast I don't think that worked at all I think they lost money by the feeling of it.

Yes I'm salty my alt has no no Rena not even the cat Rena...T_T
but I got 3 times of valentines Verda who I'll never never use.

Discord people was getting the 'Ice sword' I was salty I wanted another one so my hype all this time was the weapon gacha >_> I never got a sword of the new gacha draws.

So I went to the sword gacha the normal one and I got...

Win people was getting Ice swords I got this...Fayt weapon

It's not bad but it red and black it reminds me of Fayt Dimension Door that he don't have yet not in this world.

Fayt and his sword and what he has on.

I think Fayt likes his sword over the others but Reimi sword is pretty...never got another one of Reimi sword either...

My main account Luna finally got Leon *hype* unfortunately main account 'Fayt' is protesting already...>_> auto battles you got to love them it shows how the party really feels about the party.

So looks like my main account Fayt is stuck with his sword that or the Wind sword Edge weapon that he can use for damage.

But no on my main account I never did draw for valentines nor did I draw for this banner that we have now so getting a Free Leon and Fayt weapon might be some of the luck of not doing any draws?

But I want to save for the Wedding event that is my goal for now.

But if they do a good collaboration I might be tempted to spend money.

Hmm...Kingdom Hearts might work but I do want Nier Automata over anything else for now.

So this is a update on what I got for my main account Luna and a update on
STAR OCEAN PROGRAM #24 people are guessing that it's Clair that is going to show up again but we don't know yet.
Collapse